Reaching the Summit for Mental Health and Wellness – 2017

Mount Farquhar (the peak to the left), named in 1919 to honour the memory of Lt.-Col. Francis D. Farquhar, founding commanding officer of PPCLI,  was intended as the location of our 2017 event. Farquhar was killed in action on March 20, 1915 during a relief operation. Mt Farquhar is situated astride the BC Alberta border. Due to our inability to gain vehicular access to the base of Mt Farquhar on the Lost Creek Trail, which had been washed out in several locations, we climbed to the summit of Mt Burke instead.  Mt Burke is located about 16 km East of Mt Farquhar and its summit is at 2,540 metres, an elevation gain of 670 metres over a distance of 8km. 33 climbers participated and raised in excess of $55,000 to assist veterans and their families struggling with PTSD and other forms of mental illness. 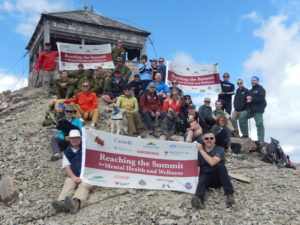 33 climbers and several canines participated in Reaching the Summit for Mental Health and Wellness 2017 and raised more than $55,000. 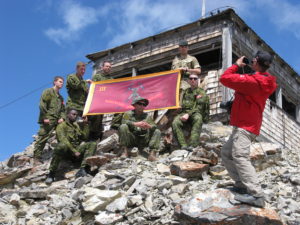 Support team from 3rd Battalion, PPCLI at the old fire lookout on the summit of Mt. Burke, 24 June 2017.