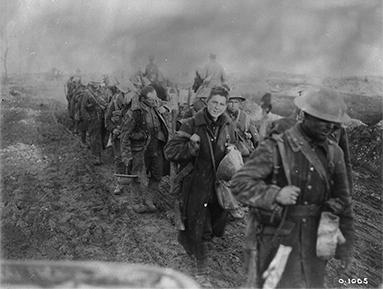 Few words conjure the futility and the staggering losses of the First World War like the Somme. In the summer of 1916 the British launched a major offensive against German lines. The battle lasted five months, killed or wounded approximately 1.2 million men, and produced few gains. The Canadian Corps was only involved in the final three months of fighting, but suffered 24,029 killed and wounded during that period.

On the offensive’s first day, July 1st, the Newfoundland Regiment under British command was nearly annihilated at Beaumont-Hamel, with a crippling 324 killed and 386 wounded out of a total of 801 soldiers. Total British casualties on that day totaled nearly 60,000.

It was an amazing tribute to the more than 24,000 Canadians who were killed or wounded in less than three months of battle. We are indebted to so many for their contributions and donations to the success of the Dinner:

– Her Honour, the Honourable Lois Mitchell, Lieutenant Governor of Alberta and her husband, Honorary Colonel, the Honourable Douglas Mitchell;
– The Naval Museum at The Military Museums for the use of its facility for the dinner and TMM for use of Cooper-Key Hall for the reception, both perfect settings for such a commemorative dinner;
– Cadets of the PPCLI and Calgary Highlander Cadet Corps who carried out greeter and escort duties and to the Regimental Pipes and Drums of the Calgary Highlander Cadet Corps for an impressive performance during the dinner;
– The PPCLI Museums & Archives and the Calgary Highlanders for loan of candelabra, table pieces and an impressive showing of World War I uniforms and equipment;
– PPCLI Regimental HQ and 3rd Battalion for assistance in organization of the dinner and provision of two outstanding axemen;
– our auction donors for the provision of goods and services that raised more than $5,000;
– more that 130 participants and other donors;
– Emcee Colonel (Ret’d) Malcolm Bruce, who masterfully orchestrated all of the bits of the evening;
– To Tom Brooks and Kathy from Brooks and Dodd, our event planners, who ensured a perfect and enjoyable evening; and
– To the members of our Organizing Committee for a job well done.

The net result is an outstanding evening that has provided more than $15,000 for youth education programs.